Home » Blog»Uncategorized » Emphasis Patrols are Back

Emphasis Patrols are Back 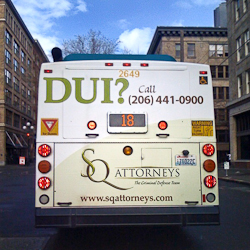 Although the Thanksgiving holiday has come and gone … there are more holiday festivities right around the corner, as we all well know. And in conjunction with the holidays the Washington State Patrol has again increased its DUI patrols. It started this past weekend when the Impaired Driving Section of the Washington State Patrol (WSP) deployed the Mobile Impaired Driving Unit (MIDU), which operated from November 22 through 25, 2017. The deployment supported the annual holiday season DUI emphasis patrol campaign run by WSP’s Target Zero program.

The MIDU is a self-contained 36 foot motorhome that has been retrofitted as a mobile Driving Under the Influence processing center and command post. The MIDU is equipped with three state of the art breath testing instruments, two temporary holding cells, three computer work stations, a command computer terminal, and a dispatcher console with wireless access to WSP dispatch centers. The WSP likes to think of the MIDU as a full service police station on wheels, and quite frankly, it is. In combination with the MIDU, additional troopers and other law enforcement agencies will be out on the roads in an effort to keep everyone safe on our roadways.

In short, make no mistake … the WSP will be aggressively seeking out and looking for DUI drivers on our Washington State roadways over the next 30-45 days. Because of this, party goers should have a plan on how to get around town; do not drive impaired, but if you do happen to get in a bind with the law give SQ Attorneys a call, we can help.